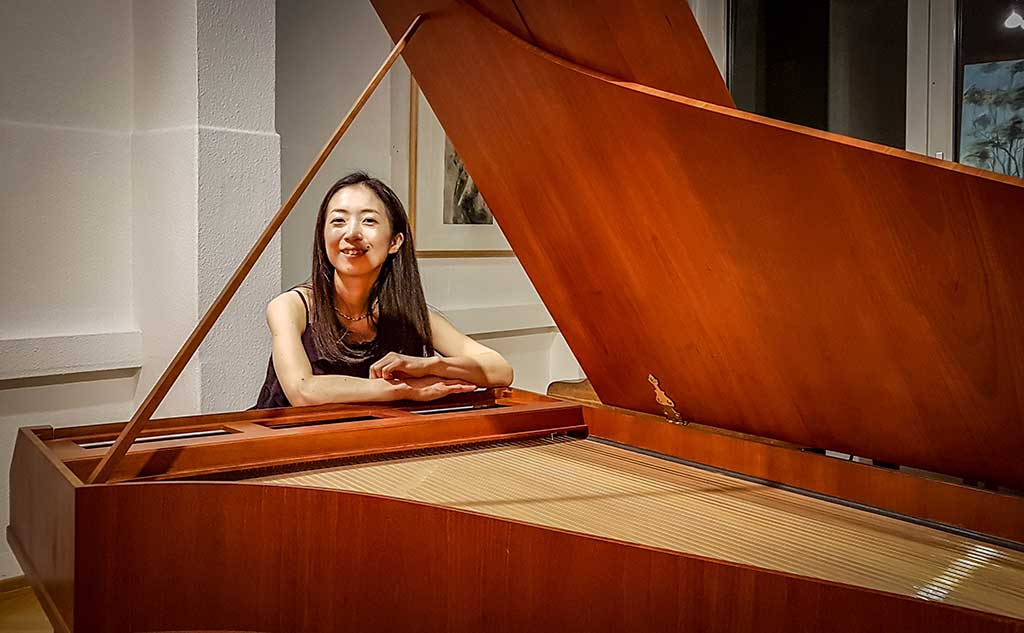 On 17.11.2018 the concert of Yuko Inoue took place, who played works of Carl Philipp Emanuel Bach and Ludwig van Beethoven on a pianoforte (a copy after Stein from 1788). She played the pieces with such ease and visual enthusiasm for the music that she captivated the audience in a flash.
The pianoforte is a forerunner of the “modern” piano, which already had hammerheads and thus gave the pianist for the first time the opportunity to dynamically vary the volume of his playing, as we are used to from today’s instruments. However, the construction is much lighter compared to today’s instruments, it lacks the heavy metal frame on which the strings are wound, and the light hammer heads are covered with leather instead of felt. Also, the strings are much thinner and thus resemble those of a harpsichord. All this gives the pianoforte a distinctive sound that can best be described as a mixture of today’s piano and harpsichord. Especially composers such as Mozart, Haydn and also Carl Philipp Emanuel Bach as well as the young Beethoven played on such instruments, so that such a concert gives the sound ideas of the composer most justice also from a music-historical point of view.
Similar to the harpsichord, the keystroke is extremely light, which on the one hand allows the pianist an insane speed, but on the other hand requires a high degree of technique, especially considering the already mentioned possibilities in the sense of the dynamic regulation of the volume.
Yuko Inoue proved on that day why she did her concert exam with honors (the highest academic qualification for a musician) on this instrument. As difficult as it is to play fast on an instrument: the way these pieces are played distinguishes the best among the best. To play extremely difficult runs and thereby strike the already very sensitive keys only a shade easier or harder, from pianissimo to fortissimo, to work out the individual parts of a piece in such a way that the musical interpretation quickly becomes familiar to an inexperienced ear as well keeping a smile on your lips during these highly complex tasks and living the music for yourself rather than just playing it: this is what characterizes Yuko Inoue as a true master of this instrument!
Thus, the evening turned out to be a great listening pleasure in two ways: by the unfamiliar sound of the pianoforte, as well as by the very successful interpretation of these works, which without a doubt presented to the listener the sound idea of ​​the composers in a very lively way. 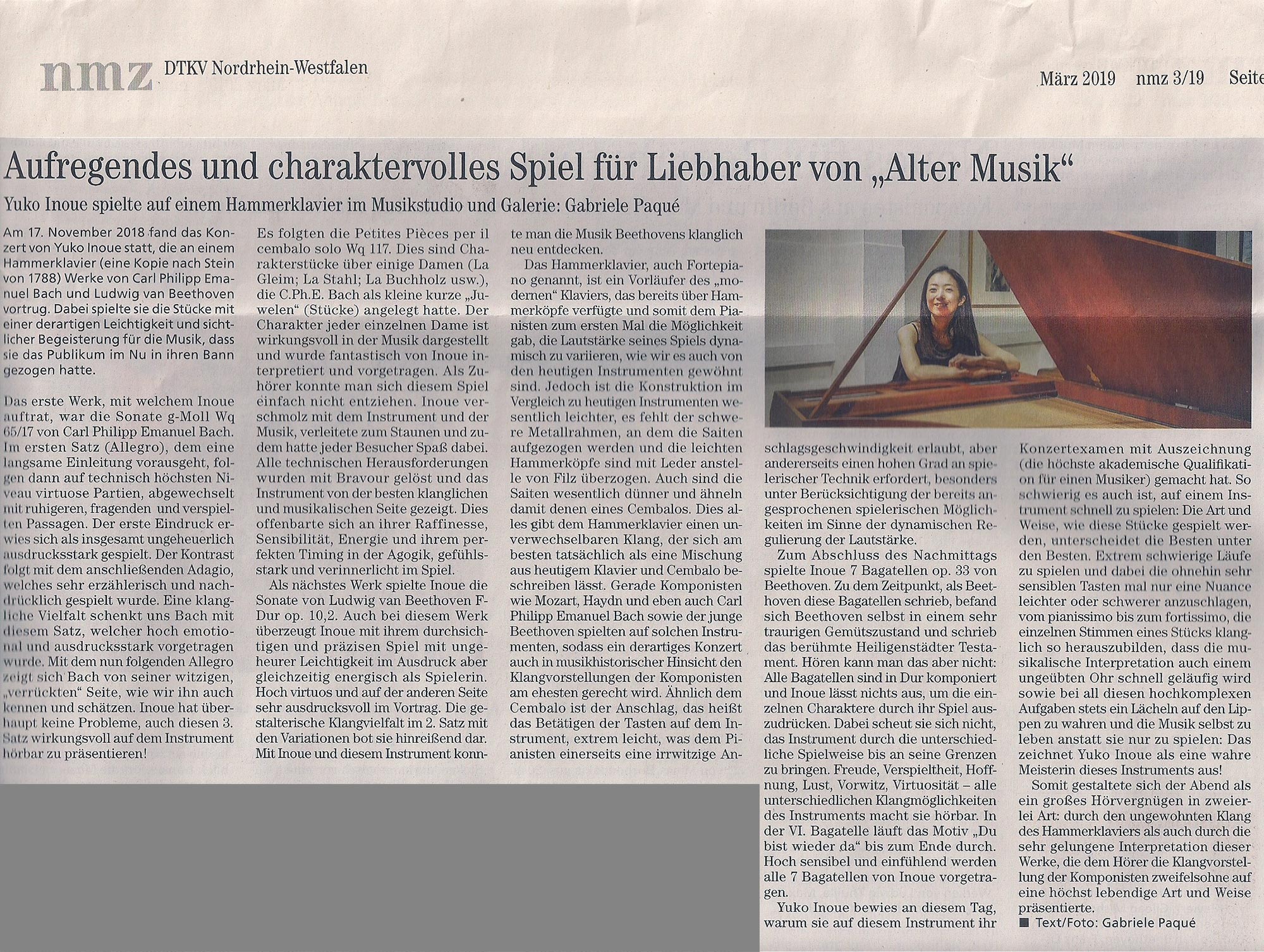 Most recently Yuko Inoue played in 2016 in the music studio and convinced the audience with her great musical talent and her love for old music. In the meantime, she did her concert exam with Prof. Gerald Hambitzer with top marks and thus she is at the same time the first musician to do a concert exam at the University of Music and Dance in Cologne on this instrument. Her musical brilliance and technical sophistication are second to none, so I highly recommend this concert to every music lover!

Yuko Inoue enjoys a remarkably broad-span career, traceable to her creative childhood, in which above-the-average gifts and talents lead to her first musical appearances already as a six-year old. After her Bachelor graduation at the Music College of Tokyo and being laureate at several piano- and chamber music competitions during this period, she took up a keen interest in historical keyboard instruments, and graduated with a Master of Music in harpsichord. Alongside her performing studies, she also followed musicological threads in a special curriculum about the Fantasia style in C.P.E. Bach’s composition.
After the her debut recital in 2004, Ms Inoue has established her place in the music life, with numerous appearances as harpsichordist and forte-pianist, both in solo and chamber music – in Japan as well as in Europe, i.e., with the Klassische Philharmonie Bonn, Kölner Kammerorchester, Sinfonieorchester Aachen, The Norwegen Baroque Orchestra and at the Utrecht Festival voor Oude Muziek. Although her wide-reaching repertoire encompasses all the major corner-stones in French, Italian and German literature, her keen interest in the works of CPE Bach and the Bach family has brought about new recognition of combining music for both instruments equally. This makes her stand out uniquely from the field of the younger performers of today.
Currently based in Cologne, Germany, Ms Inoue is occupied with concert and recording activities. She studied Early Music with the prof. Ketil Haugsand and graduated with Master of Music in Fortepiano, and Konzertexamen in the Hochschule für Musik und Tanz Köln. Since 2015, she is continuo-player for the Ringve International Summer Course of Early Music, in Trondheim, Norway. In the autumn of 2018, Yuko Inoue fortepiano debut CD “ The Art of Emotion “ will be released from Simax.

Current exhibition by Stephanie Binding with “Of cities and people”
The gallery is open on saturdays between 14 and 18 pm.
After telephonic agreement the gallery can also be visited at other times.
Blücherstr. 14, 53115 Bonn
Phone: 0228-41076755