Update 16.12.2019 – Photos of the FINISSAGE and CONCERT: Sue Schlotte and Luis Berra present “Beethoven and improvisations” 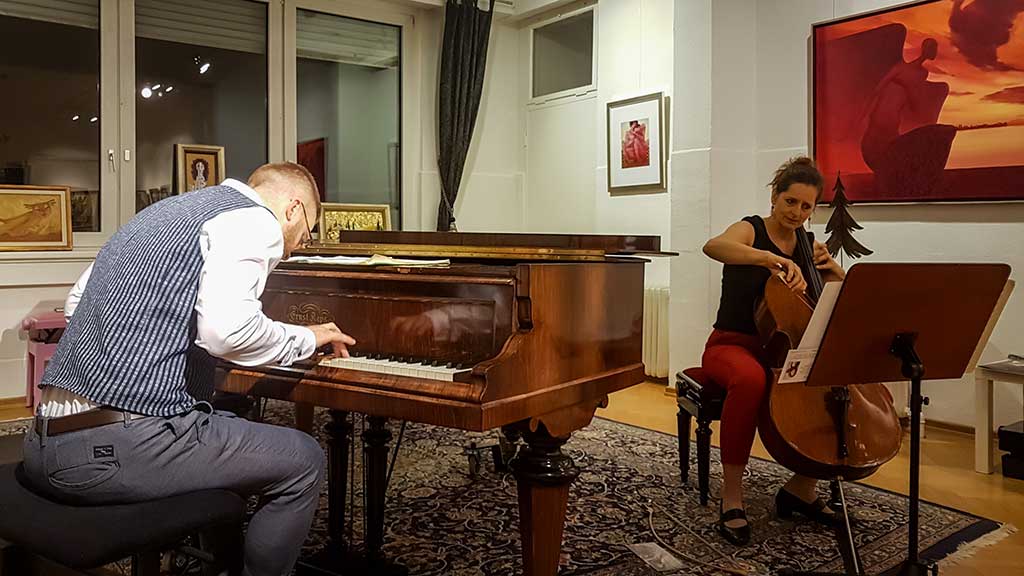 On December 14, 2019, Sue Schlotte (cello) and Luis Berra (piano) played for the first time in the Musikstudio, while presenting works by Beethoven, but especially their self-composed works. This heralded the finissage of the wonderful exhibition “Watching and Listening” by Victor Shtivelberg, which delighted visitors and the press. 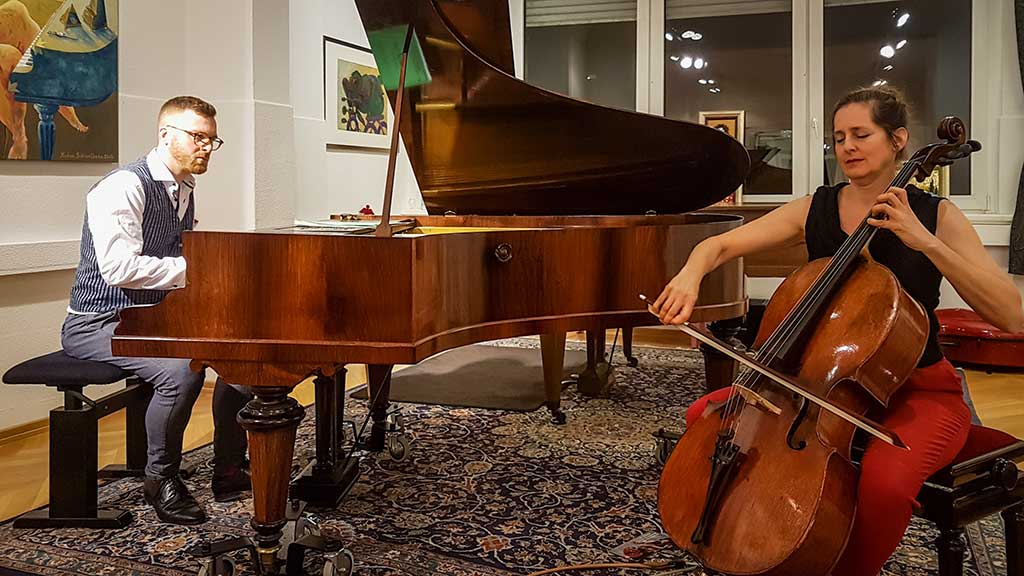 An ensemble of piano and cello has already been heard several times in the Musikstudio, but the jazzy compositions and improvisations of the two musicians were a novelty here, which I wholeheartedly would like to recommend!
The musicians managed to wrap the studio in a true soundscape with only two instruments, which were supplemented in some places with vocals by Sue Schlotte. The sometimes contemplative mood up to the thrilling flood of emotions captivated the listeners without exception, which is undoubtedly due to the masterful interplay of the two musicians, who truly merged with their instruments.

I would therefore like to thank these two musicians, the artist Victor and his wife Ninelle Shtivelberg and, of course, the great audience from the bottom of my heart for this worthy conclusion to a glamorous exhibition and an exciting year!

Now the year is almost over and the finissage of the exhibition “Watching and Listening” by Victor Shtivelberg is just around the corner. Cellist Sue Schlotte and pianist Luis Berra have come up with a very special program:

With the compositions “Ancestral Dances“, which were released on CD in 2018, the pianist Luis Berra has created a touching, wildly delicate music. It forms the starting point in this concert. The cellist Sue Schlotte immerses herself in the sounds with her cello. Warm tones close to the voice join the piano sounds. A dialogue begins. Unknown may arise: in the sense of Ludwig van Beethoven:
” … freedom alone, going on in the art world, as in the whole great creation purpose …” Suddenly Beethoven’s music resounds: movements of the Sonata in A major for cello and piano. What happens next remains open – a journey into the unexpected, to which the two musicians invite their audience.

Compositions and improvisations
by Luis Berra and Sue Schlotte

Sue Schlotte is a cellist. She performs in a variety of formations and solos, giving concerts in Europe and the USA. She participates in interdisciplinary projects such as film and radio drama and works with artists from the fields of dance, painting, performance and literature.
She studied Philosophy, Psychology and Music Education in Frankfurt and Violoncello in Mainz. In 1996 she completed her music studies with a diploma. Masterclasses with cellists Hans Erik Deckert and Heidi Litschauer completed her studies. Sound studies, the development of modern playing techniques, training and others. in the case of Lauren Newton / voice improvisation and Gunther Tiedemann / jazz-cello, let Sue Schlotte to finding her own style. In addition to the traditional bow she uses the BACH bow, a round arch, by Michael Bach Bachtischa.

She lives with her family in Bonn. She is a member of GEDOK Bonn and curator of SOUNDTRIPS NRW. In Bonn, she has launched the initiative Imprompt – Contemporary Art and Music / Bonn and leads the concert series Silence & Abundance.

Luis Berra was born in Managua, Nicaragua in 1985 from an Argentinian mother and an Italian father. He spent his childood in Carmignano, Toscana, 15 km from Florence, and in Sardinia. He started to study piano at 6 years old in the Toscana. In Sardinia he studied at the Music Conservatory in Cagliari for 4 years.
Florence, the Toscana as well as the Mediterranean See were always an inspiration for his Music. The LPs of his father were also very important in his musical Education. Keith Jarrett, Bob Dylan, Paolo Conte , Italian and American songwriters, influenced his music until now.
In 2002 he won a Scholarship to attend his Highschool Senior year in Glenwood Springs, Colorado where he discovered Jazz, Blues and American Music. He played the piano in a Restaurant on the weekend in Glenwood Springs while attending highschool.
In 2003 he came back to Florence where he started to play around clubs, bars, hotels, with band or singers or alone. He continued privately his music education in modern piano. Since his 24th birthday he plays professionally in luxury hotels all around italy as a house pianist. In the meantime he composes, records and collaborates with many Italian artists.
At 29 years old he moved to Germany (Cham, Bavaria) to live with Martina, his actual wife. They got married in august 2016. Today he works in Bavaria as a house pianist for many luxury hotels in the Bavarian forest. He also performs at theaters, music halls and he teaches piano in three music schools. In less than 3 years he performed more than 200 times.
His first piano solo Album “Getaways” was recorded in 2016 in his House in Bavaria. The Album “Piano Creatures” was recorded in February 2017 in the Bauer Studios in Ludwisburg (/https://www.bauerstudios.de/) and released on May 12th 2017 by the Swedish label 1631 Recordings (http://www.1631recordings.com/), a very famous studio that worked with musicians like Keith Jarrett, Dave Brubeck and many others. He recorded on a Steinway D grand piano that can be considered one of the best grand Piano in Europe. The album “Ancestral Dances” (1631 Recordings) is also recorded in the Bauer Studios in 2018. It’s inspired by traveling, different cultures, folk music and J.S. Bach.

Current exhibition: Victor Shtivelberg – Watching and Listening
The gallery is open on Saturdays from 2 – 6 pm.
By appointment, the exhibition can also be visited at other times.
Blücherstr. 14, 53115 Bonn
Telefon: 0228-41076755