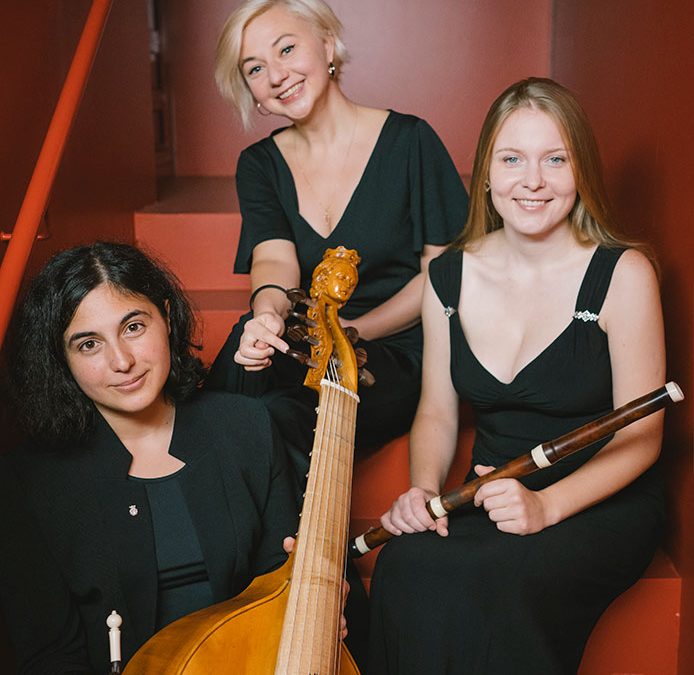 Due to the ongoing pandemic the concert has been moved from April to the 2nd of October 2021!

The early music trio “La Réjouissance”, consisting of Mariya Miliutsina (transverse flute), Amarilis Dueñas (viola da gamba & violoncello) and Natalia Lentas (harpsichord), formed in 2018 from the students of the Hochschule für Musik und Tanz in Cologne. The name is dedicated to the 18th century French folk dance of the same name and it can also be translated as “joy”. You can hear works of the Baroque period, represented by composers such as G. P. Telemann, C. Schaffrath, F. Geminiani and others. You can find the exact program as well as the curricula vitae of the musicians below.

With such a beautiful concert, the joy is certainly guaranteed and I look forward again to welcoming you to the Musicstudio! 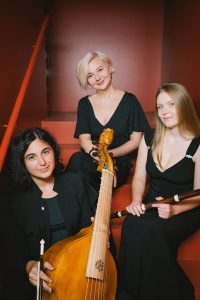 The ensemble was formed in June 2018 from students at the Cologne University of Music and Dance and named itself after the French folk dance of the 18th century “Réjouissance”, which also occasionally occurs as part of a suite, and can be translated as “joy”. The main line-up consists of baroque flute, viola da gamba / baroque violoncello and harpsichord. Nevertheless, they like to try other casts. Since July 2019, the trio of La Réjouissance has received a scholarship from the Werner Richard – Dr. Carl Dörken Foundation.

Mariya Miliutsina, transverse flute:
Born in Vitebsk (Belarus) in 1992, she began her musical education with the flute in a school with a special focus on playing music at a young age. Just one year later she was on stage as a soloist with the chamber orchestra of the Belarus State Philharmonic. Many different concerts, competitions and master classes followed in Belarus, Russia, Ukraine, Moldova, Poland and Germany.
In 2011 she began studying at the State Music Academy in Minsk, where she also worked as a chamber and orchestral musician. To expand her education, she began studying at the Cologne University of Music and Dance in baroque flute with Jennifer Seubel and in transverse flute with Prof. Manfredo Zimmerman, and since October 2018 with Prof. Leonard Schelb. In 2013 she participated in the summer academy “Dresden – Music at the Court of August the Strong” and in 2018 in the summer academy in Wuppertal as a flute player.

Amarilis Dueñas, Viola da Gamba and baroque cello:
Born in Spain in 1998, she started playing the cello at the age of 5 and has been studying with Maria Kliegel (cello) since 2016 and with Rainer Zipperling (viola da gamba and baroque violoncello) at the Cologne University of Music and Dance since 2018. Her training also includes master classes with Jordi Savall, Paolo Pandolfo, Bruno Cocset and Natalia Gutman.
She has also received awards at international competitions – Pau Casals International Award or Oncurso de Música Antigua Conde Oeiras and others. – and played concerts all over Europe (for example the performance of Buxtehude’s “Membra Jesu Nostri” at the “Trondheims St. Olavs” Festpielem 2018). In 2014 she made her debut as a soloist with orchestra. She regularly performs with all three instruments.

Natalia Lentas, Cembalo:
Born in Poland in 1988, she studied piano at the University of Music in Wrocław, as well as at the University of Music and Dance in Cologne. After completing her master’s degree, she continued her musical education in the Early Music program and graduated with honors in the concert examination in fortepiano with Prof. Gerald Hambitzer at the Hochschule für Musik und Tanz in Cologne, as well as the master class studies in the class of Prof. Christine Schornsheim at the Hochschule für Musik und Theater in Munich. In the context of various master classes, she learned from Ronald Brautigam, Kristian Bezuidenhout, Alexei Lubimov, Tobias Koch, Wolfgang Brunner and Bart van Oort, among others. In 2018 she was awarded with Förderpreis für Musik of the state capital Düsseldorf. She also received numerous prizes at piano and fortepiano competitions such as: 1st prize at the Kulturkreis Gasteig Music Prize 2017 (Munich), 1st prize at the International Competition for the Gebrüder Graun Prize, 1st prize at the International Fritz Neumeyer Competition for Fortepiano in Bad Krozingen and 1st prize at the International Geelvinck Fortepiano Concours in Amsterdam. As a soloist and chamber musician, Natalia Lentas can be heard regularly at the Beethoven-Haus in Bonn, where she gives concerts on a Conrad Graf fortepiano (1824). Since 2019, she has been an adjunct professor of accompaniment fortepiano at the Hochschule für Musik und Tanz in Cologne. Currently she is still studying harpsichord at the University of the Arts in Essen in the class of Prof. Christian Rieger.