Update 27.04.2020 – Photos from the concert: Yizhuo Meng plays works by L. v. Beethoven at the opening of our Beethoven exhibition 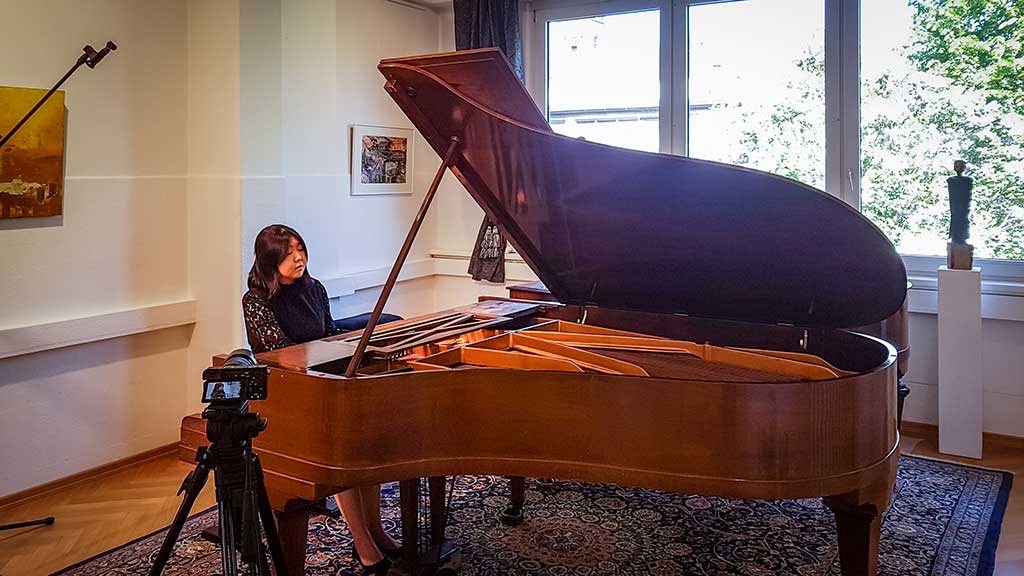 A small premiere took place on Saturday in our Musikstudio: a vernissage without guests, but with a whole range of technology. Interviews and a small piano concert were recorded with no less than 4 cameras. In addition, there are 360​​° panoramic shots, which should enable you to take a digital tour of our premises!

You can find all about the exhibition also here on our gallery-site. 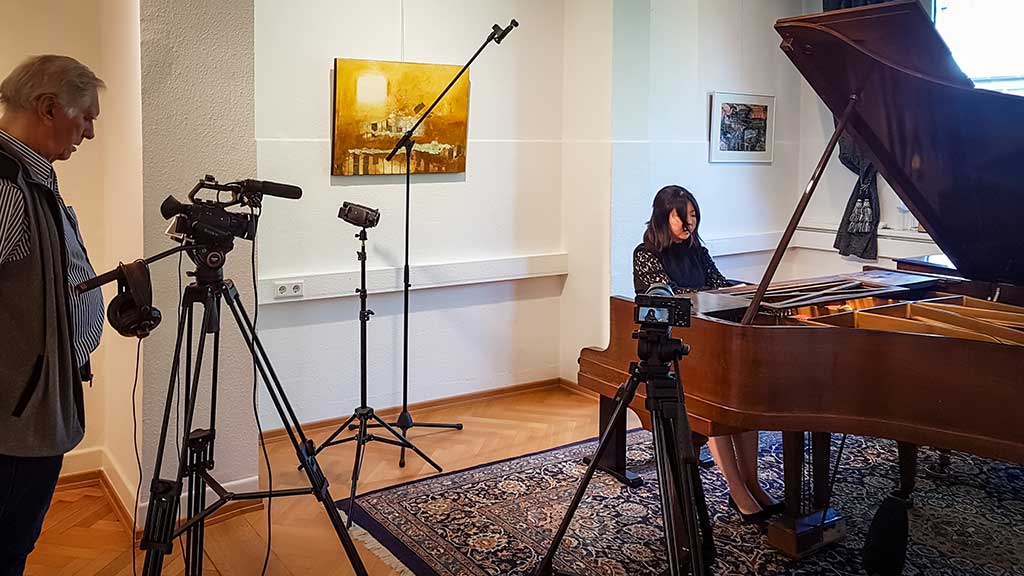 The musical part was performed by Yizhuo Meng, who performed a wonderful interpretation of the 1st movement of the moonlight sonata and Beethoven’s work “Les Adieux”. The full length concert can be found here:

You can find the interactive tour through the exhibition by clicking on the picture below. Please also read the short instructions:

Welcome to this interactive, virtual 360 degree tour. By keeping the left mouse button pressed, you can look around in all directions and change the distance with the mouse wheel. With a click on the different icons, they open information, pictures or videos. If you click on the arrow, you go on in a certain way: to another position or into another room. Just like on a real tour, you can decide for yourself where – and how often and for how long – you want to watch something, and you are not tied to a specific sequence of events, as is the case with a film. And now have fun with your personal 360-degree tour. 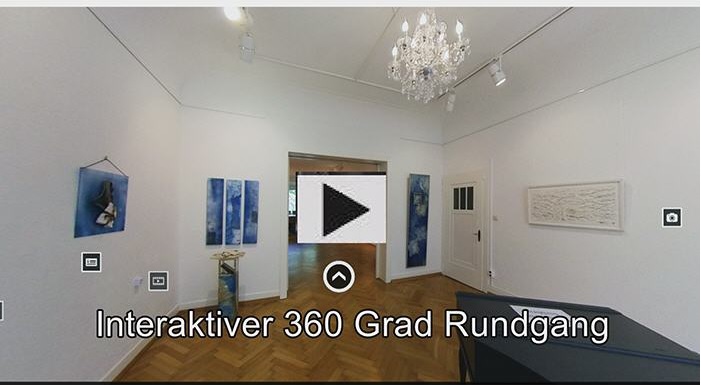 Changes to the vernissage due to the current situation:

It is not yet clear whether the vernissage can take place with visitors. Nevertheless, it will take place in any case. Mr. Goetze from the TV-Künstlerkanal, who has already reported several times about the exhibitions in the Musikstudio, will film this vernissage and we will then publish it on the Internet. So you can participate in any case, even if you then unfortunately have to do without the nice atmosphere and the delicious cake.
Due to this uncertain situation we unfortunately had to cancel the concert of the trio “La Réjouissance”. Instead, Yizhuo Meng, who also gives lessons in the Musikstudio (currently, like all of us, of course via video chat) will record Beethoven’s “Les Adieux” for the film by Mr. Goetze.
We will of course keep you up to date on our website and very much hope that concerts can take place again soon and that we can welcome you again!

For the 250th birthday of Beethoven, the Musikstudio has of course also planned something special! We therefore asked 7 artists for their contributions to a collective exhibition on the subject of Beethoven. Among them are Otto von Kotzebue, Máro, Maria Dierker, Milena Kunz-Bijno, Michael Tauchert, Rafael Ramirez-Máro and Alejandro DeCinti, who all worked on new pieces in honor of Beethoven.
Whether you are a fan of classical painting or more experimental art – you will definitely find something beautiful here that you might even want to take home with you! Many of the artists will also be present at the opening so that you can get a personal impression of their artistic approach.

This time, the musical part of this opening will be performed by the trio for early music “La Réjouissance”, which was formed in 2018 from students from the Cologne University of Music and Dance. The name is dedicated to the French folk dance of the 18th century and it can also be translated as “joy”. They will play works from the Baroque period, which, as it seems, wasn’t too far from Beethoven as one might think. La Réjouissance write:

On the way to Beethoven

Ludwig van Beethoven is undisputedly one of the best-known composers. Both now and in life. However, it is less well known that he can still be seen composing for harpsichord at a young age. Beethoven’s teacher, Christan Gottlob Neefe, introduced him to baroque music, especially Johann Sebastian Bach, early on, which is why Beethoven also called Bach the “forefather of harmony”.
Through these influences, he also composed “contemporary” music for fortepiano or hammer piano, but even at the age of 25 he composed a work for mandolin and harpsichord. Notable is the influence of Carl Philipp Emanuel Bach, Johann Sebastan Bach’s son, who is now in the shadow of his father, but was more famous and successful at the time. Those composers such as Haydn, Mozart and Beethoven describe that they studied it carefully and learned a lot
were able to, especially regarding works for keyboard instruments. Especially in Beethoven’s late years, he wrote polyphonic compositions like Missa Solemnis, which shows that he was definitely influenced by baroque composers. We are trying to work out this influence.

With such a beautiful celebration, the joy is definitely guaranteed and I am looking forward to welcoming you back to the Musikstudio!

On the way to Beethoven

The admission is free!
We kindly ask for a donation for the musicians. 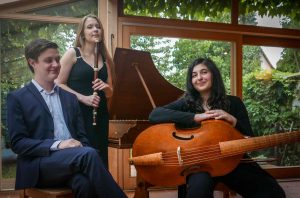 The ensemble was formed in June 2018 from students at the Cologne University of Music and Dance and named itself after the French folk dance of the 18th century “Réjouissance”, which also occasionally occurs as part of a suite, and can be translated as “joy”. The main line-up consists of baroque flute, viola da gamba / baroque violoncello and harpsichord. Nevertheless, they like to try other casts. Since July 2019, the trio of La Réjouissance has received a scholarship from the Werner Richard – Dr. Carl Dörken Foundation.

Mariya Miliutsina, baroque flute:
Born in Vitebsk (Belarus) in 1992, she began her musical education with the flute in a school with a special focus on playing music at a young age. Just one year later she was on stage as a soloist with the chamber orchestra of the Belarus State Philharmonic. Many different concerts, competitions and master classes followed in Belarus, Russia, Ukraine, Moldova, Poland and Germany.
In 2011 she began studying at the State Music Academy in Minsk, where she also worked as a chamber and orchestral musician. To expand her education, she began studying at the Cologne University of Music and Dance in baroque flute with Jennifer Seubel and in transverse flute with Prof. Manfredo Zimmerman, and since October 2018 with Prof. Leonard Schelb. In 2013 she participated in the summer academy “Dresden – Music at the Court of August the Strong” and in 2018 in the summer academy in Wuppertal as a flute player.

Amarilis Dueñas, viola da gamba and baroque violoncello:
Born in Spain in 1998, she started playing the cello at the age of 5 and has been studying with Maria Kliegel (cello) since 2016 and with Rainer Zipperling (viola da gamba and baroque violoncello) at the Cologne University of Music and Dance since 2018. Her training also includes master classes with Jordi Savall, Paolo Pandolfo, Bruno Cocset and Natalia Gutman.
She has also received awards at international competitions – Pau Casals International Award or Oncurso de Música Antigua Conde Oeiras and others. – and played concerts all over Europe (for example the performance of Buxtehude’s “Membra Jesu Nostri” at the “Trondheims St. Olavs” Festpielem 2018). In 2014 she made her debut as a soloist with orchestra. She regularly performs with all three instruments.

Lars Hobein, harpsichord:
Born in Hagen, 1995, Lars Hobein started taking piano lessons at the age of 7. In 2004 he won second prize at the “Concours Musical de France” and the following year the first prize. At the age of 14 he took his C certificate in the Westphalian church district under KMD Manfred Kamp and has since been cantor of a parish in Hagen.
After graduating from high school, he began studying harpsichord and general bass in Cologne with Prof. Michael Borgstede. He likes to devote himself to ensemble play and endeavors to always play and accompany “historically informed”. In 2018 he performed the Brandenburg concerts with the Hagen Chamber Orchestra and played on the Festiwal Muzyki Klasycznej w Solcu nad Wisla.

CANCELLED
Announcement:
The next concert will take place on 09 May 2020 at 17 o’clock:
Students of Prof. Sheila Arnold (HfMT) play Beethoven’s works without opus numbers

Current exhibition: In honor of Beethoven – A collective exhibition
The gallery is open on saturdays between 14 and 18 pm.
After telephonic agreement the gallery can also be visited at other times.
Blücherstr. 14, 53115 Bonn
Phone: 0228-41076755