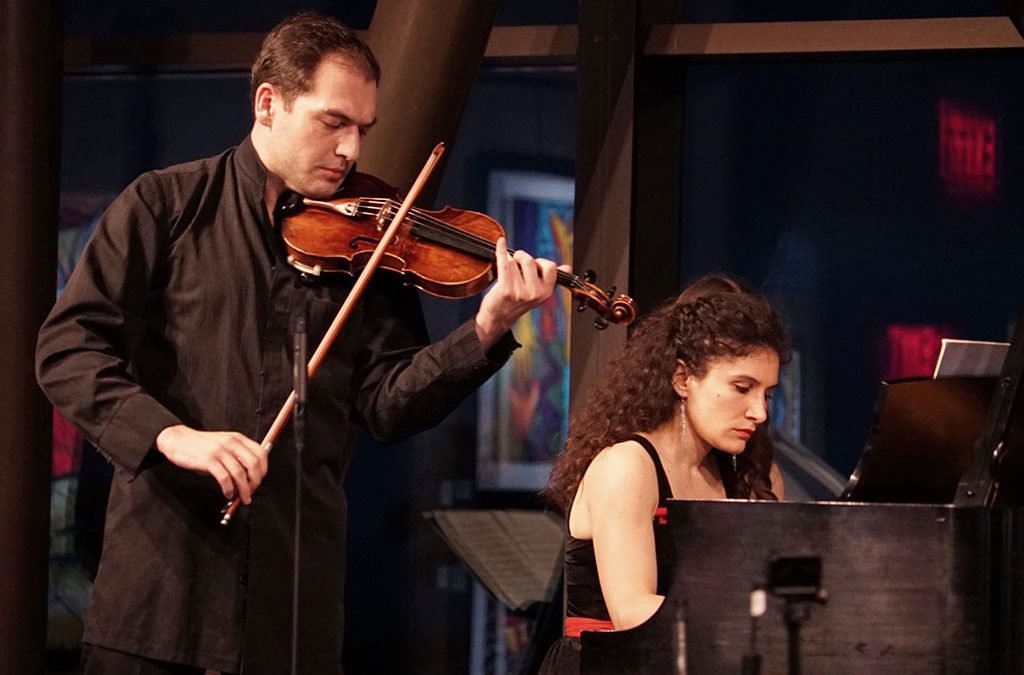 We were already able to experience Sara De Ascaniis in 2019 with an impressive concert for 4 hands on a piano together with Georgy Voylochnikov.  This time she performs together with violinist Irakli Tsadaia. Both are highly renowned prize winners of various competitions. For more information, please see their resumes below.

Look forward to an exciting concert with works of the 19th and 20th century by the composers Claude Debussy, Sergei Prokofiev and Cesar Franck! You can find the program below. 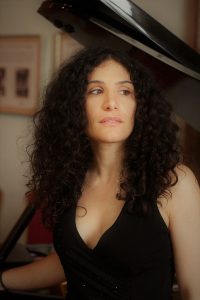 Born into a family of musicians, Sara De Ascaniis began playing the piano by ear at the age of two, improvising on her own. At the age of seven she entered the music conservatory “Arrigo Pedrollo” in Vicenza, from which she graduated with honors in 2006. She then continued her studies at the University Mozarteum Salzburg with Claudius Tanski. There she completed her master’s degree in 2014 in the class of Imre Rohmann, who was a former student of Ferenc Rados and György Kurtàg.
At the age of nine she was already a winner of various competitions such as the J.S. Bach Prize of Sestri Levante, Recanati Prize, Minerbio Music Competition, Rospigliosi Competition of Lamporecchio, Matteo Molinari Prize and Chamber Music Award at the Conservatory of Vicenza, “Young Talents” of Venice, Silvio Omizzolo Prize of Padua, Vito Frazzi Prize of Florence, Mozart Prize at the Mozarteum Salzburg as well as the International Piano Competition of Baden-Baden.
She received important musical impulses from renowned piano teachers such as Karl-Heinz Kämmerling, Pavel Gililov, Leonid Margarius, Benedetto Lupo, Boris Petrushansky, Lilya Zilberstein and especially Konstantin Bogino, member of the Trio Tchaikovsky. Under his direction, she completed postgraduate studies at the Cesare Pollini Conservatory in Padua.
Over the years, she has developed a special passion for chamber music and has frequently performed with various instrumentations ranging from duos to quintets. She has worked with artists such as Wolfgang Redik, Rainer Schmidt, Igor Ozim, Enrico Bronzi and Alois Brandhofer.
Her performances as a soloist and chamber musician have taken her throughout Europe, in Canada and in the United States, where she has performed in famous concert halls such as La Fenice in Venice, Teatro dal Verme in Milan, Teatro Bibiena in Mantua, Ehrbar-Saal in Vienna, Wiener Saal in Salzburg, Steinway-Haus in Munich, Joseph-Joachim-Konzertsaal in Berlin, Tanna Schulich Hall in Montréal and Bing Theatre in Los Angeles.
Since her debut with Mozart Piano Concerto K414 at the age of eleven, Sara has performed with various orchestras, including the Symphony Orchestra of Padua and the Symphony Orchestra of Chioggia, with which she has interpreted the Piano Concertos of Schumann and Beethoven (n.3). She has been invited to various festivals, such as the International Festival of Lucca, “Società dei concerti” of Milan, Oberhausen Festival, International Concert Association of Lake Constance, Aurora Chamber Music Festival in Sweden, Salzburg Chamber Music Festival, “iPalpiti” Festival in Los Angeles (California). In Los Angeles, her concert at the Bing Theatre was broadcast by the national radio KUSC.
In 2020 she participated in a live recording on the piano sonatas of Sergei Prokofiev, which was released in the same year as a CD by the label Velut Luna. The release of her album “Fantasies” with works by Schumann, Chopin and Scriabin is planned for 2021.
She devotes herself enthusiastically to piano teaching and is a lecturer for piano at the Municipal Music School in Berlin- Köpenick. She is also a professor or visiting professor at the State Conservatory in Italy (Conservatory Luca Marenzio of Brescia in 2019 and Conservatory Cesare Pollini of Padua in 2018, 2019 and 2021). 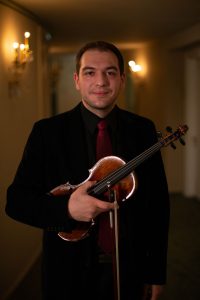 Winner of numerous competitions such as Jugend Musiziert, Louis-Spohr International Violin Competition in Weimar, Paganini International Competition in Moscow and International Violin Competition Valsesia Musica in Italy, Georgian-born violinist Irakli Tsadaia has lived in Germany since 1990 and performs regularly as a soloist and chamber musician in many European countries and in the USA.
Born into a family of musicians in Tbilisi, Irakli started music lessons with the members of the Georgian State Quartet Tamaz Batiaschvili and Konstantin Vardeli. At the age of 8 he was taught in Moscow by Galina Turchaninova, teacher of Maxim Vengerov, and at 13 he was accepted at the Conservatory in Munich. He participated in master classes of Alexander Brussilovsky, Boris Garlitzky, Felix Andrievsky and Victor Tretyakov. In 2002 he continued his studies with Prof. Tretjakov at the Hochschule für Musik und Tanz in Cologne.
His interpretations of Tchaikovsky’s Violin Concerto, Introduction and Rondó Capriccioso by Saint-Saëns, Zigeunerweisen by Sarasate and Four Seasons by Piazzolla have been broadcast by ARD, SWR, BR (Bayerischer Rundfunk) as well as by the Georgian national radio. He recorded Piazzolla’s Four Seasons in 2007 as a soloist with the Cologne Classical Ensemble and it was released as a CD by Sony BMG. In 2012, he was a finalist at the International Summer Academy Mozarteum in Salzburg and was selected among 1,003 participants for the final concert at the Salzburg Festival.
He is regularly invited to renowned festivals in Germany and abroad. Since 2010 he has been soloist several times at iPalpiti Festival (California) and performed in famous concert halls such as Disney Hall and Bing Theatre in Los Angeles, Temple Performing Arts Center in Philadelphia, Recanati Auditorium in Tel Aviv, Solitaire at Mozarteum Salzburg. From 2013 to 2018 he was concertmaster of the Georgian Chamber Orchestra Ingolstadt and since 2018 he has been deputy concertmaster with the Beethoven Orchestra Bonn. Irakli plays a 17th century violin by Giovanni Paolo Maggini, which he received as an exceptional young artist through the Foundation of the Musikhochschule Köln.