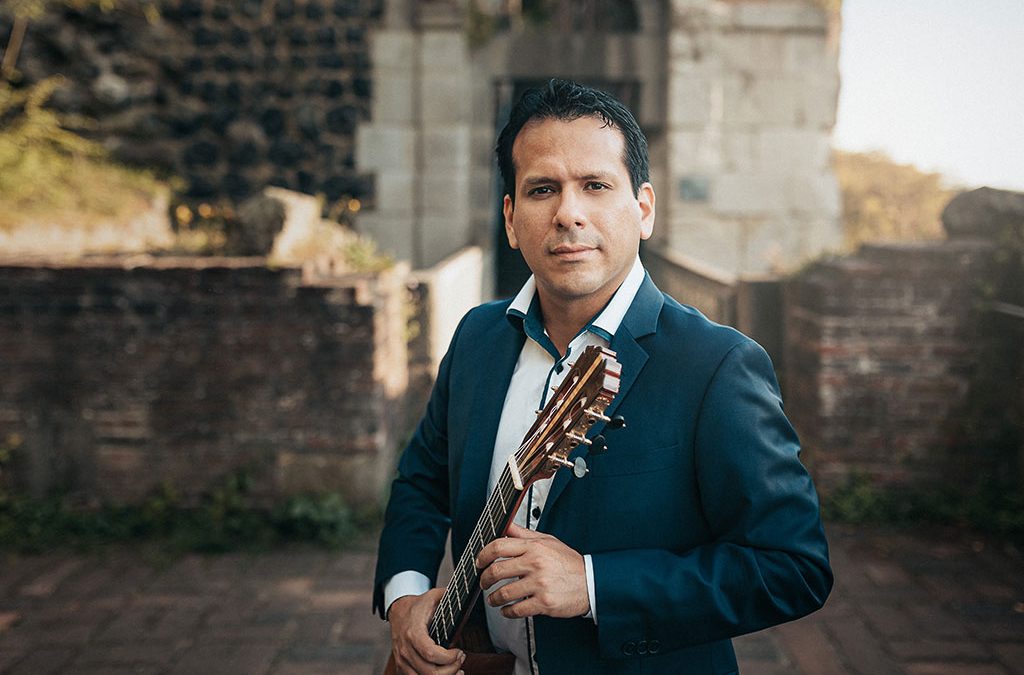 we are very pleased to present you the guitarist Juan Carlos Arancibia Navarro:

“An incredible master of the guitar” wrote a West German newspaper about Juan Carlos Arancibia Navarro after one of his concerts. More than 400 performances in Europe, Asia, North and South America as well as various radio, television broadcasts and several international awards confirm the extraordinary quality of the musician.
In addition to his busy concert schedule with orchestras and numerous music festivals, he gives master classes worldwide and leads a guitar class at the TU Dortmund University and at the Detmold University of Music. Since 2017 he has been the artistic director of the Dortmund Guitar Festival.

For us he has composed a selection of pieces by composers I. Albeniz, A. Barrios, J. Turina, F. Sor, F. Tárrega and C. Domeniconi, which we can look forward to.

At the same time you can expect the exhibition opening of the Bonn artist Milena Kunz Bijno with motifs of Indian and Christian mysticism. For more information about the exhibition, please click here.

Once again, you can look forward to an unforgettable afternoon!

Incredibly gifted on the guitar”, the Westfälische Nachrichten described Juan Carlos Arancibia Navarro in the wake of one of his recitals. The guitarist has given more than four hundred concerts in Europe, Asia and North and South America as well as taking part in countless radio and television broad­casts, all of which have confirmed his out­standing abilities as a musician.

Juan Carlos Navarro is one of the busiest guitarists of his generation. Even while he was still a student in Oscar Zamora’s class at Lima’s National Conservatory of Music he was already winning prizes and appearing in the city’s major concert halls.

Juan Carlos Navarro moved from Peru to Ger­many in 2006 to study with Dale Kavanagh and Thomas Kirchhoff of the Amadeus Guitar Duo at the Detmold University of Music. He also gained his artistic diploma in Detmold, completing his course in 2009 and pas­sing his concert examination with dis­tinction in 2012. That same year West German Radio WDR presented a portrait of him. He completed his master’s degree in chamber music with Joaquín Clerch at the Robert Schumann University in Düssel­dorf, gaining the highest mark on his course.

In Germany, too, the young guitarist has received numerous awards. In 2008, for ex­ample, the GWK, Society for the Promotion of Westphalian Cultural Life, awarded him its Young Artist Award. That same year he also received a scholarship from the Alumni Asso­ciation of the Detmold University of Music. In November 2010 he received the International Young Artist Special Prize of the Paderborn-Höxter-Detmold Volksbank. Together with the flautist Anita Farkas he has additionally received a number of prizes as part of the Arie Duo. Among them is the Leopold Bellan Chamber Music Prize in Paris.

For many years Juan Carlos Navarro has also worked as a teacher in Germany and given regular masterclasses. He lectures at the Technical University in Dortmund, where he runs the guitar ensemble that he founded. He also lectures at the University of Paderborn. In his capacity as chairman of the Dortmund Friends of Guitar Music he has run the Dort­mund Guitar Festival since 2017, working in association with the City of Dortmund and the Technical University of Dortmund. Since 2020 he teaches at the Detmold Universitiy of Music.

La Catedral is Juan Carlos Navarro’s fifth CD. His previous solo album, Danzas, was notably well received by the musical press. As one half of Arie Duo with the flautist Anita Farkas, he has also recorded the album Café, which the magazine of the Federation of German Plucked-Instrument Musicians described as “most definitely worth hearing”. All of his CDs have been released by GWK RECORDS.

Announcement:
14.05.2022 – CONCERT and READING: Urte Lucht (harpsichord) and Dieter E. Neuhaus (voice and dramaturgy) present “Macbeth: Life is but a walking shadow… a fairy tale… told by a fool”.
IN GERMAN

Current exhibition: Milena Kunz-Bijno presents “The years colorful dress”.
The gallery is open on saturdays between 14 and 18 pm.
After telephonic agreement the gallery can also be visited at other times.
Blücherstr. 14, 53115 Bonn
Phone: 0228-41076755