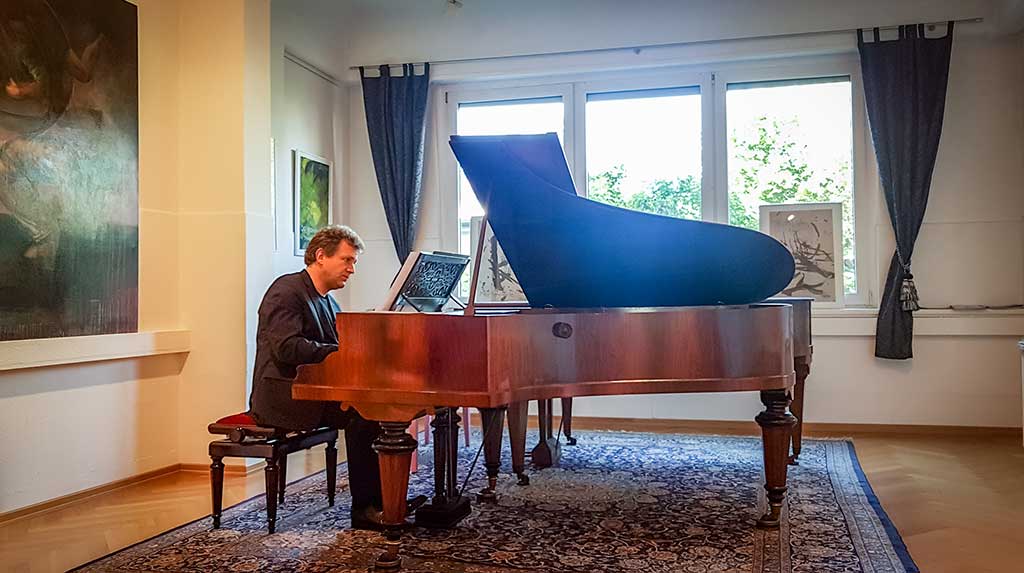 On Saturday, 01.06.2019, for the first time a concert of the famous pianist Tobias Koch took place in the Musicstudio. This performance was also associated with the premiere that there was no program this time and so the pianist had the opportunity to pepper the evening with some surprises.
The theme of this concert was the Rhenish Romantics, and thus the Musicstudio in Bonn, especially on this summery day, provided the suitable stage for such an endeavor. The audience got the chance to enjoy pieces by famous as well as less famous composers. Of course, Robert Schumann had to be represented here, as well as his wife Clara and also Felix Mendelssohn-Bartholdy. In addition, composers such as Norbert Bürgmüller and Ferdinand Hiller were represented, which unfortunately mostly fell into oblivion. In a very informative presentation, the pianist explained the connections between the musicians, who also appreciated and influenced each other.
Tobias Koch is known for his interpretations of romantic works on contemporary instruments and so he found himself in his element again with the Kaps grand piano of 1875 and the audience could experience up close, what makes him so outstanding as an interpreter. Tobias Koch’s play is characterized by a true passion for music, which he presents on the one hand with the highest refinement and empathy and on the other hand with a youthful, unaffected charm. The music is alive – it makes the listener laugh and cry. This was particularly impressive when Tobias Koch played the last few lines that Schumann composed just before his death.
But in order to blow away the gloom, he and Gabriele Paqué surprised the audience with a small “encore”: During the rehearsals, Tobias Koch noticed the music book that Gabriele Paqué was practicing with a student. These were jazzy pieces by the composer Martha Mier. Thus, he and Gabriele Paqué played such a piece for the pleasently surprised audienced with a lot of wit, charm and improvisation, which brought the evening a very cheerful ending.

It is a very special honor for me to be able to present the pianist Tobias Koch in my Musicstudio! Tobias Koch became known for his specialization in romantic performance practice. This includes among others his pioneering work with the performances of Robert Schumann’s piano works on historical instruments.
He has appeared at many major music festivals, including Verbier, the Schleswig-Holstein Music Festival, the Bonn Beethovenfest, the Chopin Festival in Warsaw and many more.
Today Robert Schumann will also be heard as well as works by Norbert Burgmüller and Ferdinand Hiller.
Tobias Koch teaches at the Robert Schumann Hochschule Düsseldorf as well as at academies in Verbier and Montepulciano.

Look forward to a high-quality concert dedicated to romance!

Works by Robert Schumann, Norbert Burgmüller, Ferdinand Hiller.
The exact program will be presented on the day of the performance by the performer.

To probe the mysteries of sound with open-mindedness, versatility and with a sense of joy for discovery is the musical credo of Tobias Koch. Right from the beginnings of his musical career, Koch has been fascinated by the expressive potential of period keyboard instruments; he plays the harpsichord, clavichord, tangent piano, fortepiano, orphica, piano-pédalier, organ, and romantic grand piano in unorthodox and spirited performances — “with disarming spontaneity,” as a large German weekly put it. Koch chooses the most suitable instrument after extensive musicological research and performance practice studies, always leading to new results.
For years, he has been considered one of the leading interpreters in the field of romantic performance practice, and particularly of the work of Robert Schumann. The German Radio MDR Figaro wrote: “Inspired and inspiring right from the beginning. Tobias Koch plays Robert Schumann’s music the way it should be played: revolutionary, romantic, with technical brilliance, emotional but without any hint of sappiness or pretence. Koch’s playing conjures up images that appear just as quickly as they fade away. Koch’s playing is infectious, every moment is an adventure.“
Koch’s comprehensive musical career as a soloist, chamber musician and Lied accompanist has taken him to music festivals throughout Europe including the Schleswig-Holstein Music Festival, Ludwigsburger Schlossfestspiele, Verbier Festival, the Warsaw Chopin Festival, Rheingau Music Festival, Beethovenfest Bonn, the Schumann Festivals in Düsseldorf, Bonn, Leipzig, and Zwickau, and the Mendelssohn Days at the Gewandhaus Leipzig.
Koch gained valuable artistic impulses in master classes with David Levine, Roberto Szidon, Walter Kamper, Jos van Immerseel and Claire Chevallier. He is a recipient of the music sponsorship award of the city of Düsseldorf and teaches at the Robert Schumann Hochschule as well as at the Academies in Verbier and Montepulciano. Koch has worked with musicians such as Andreas Staier, Gottfried von der Goltz, Joshua Bell, Steven Isserlis, Markus Schäfer, the Pleyel and Hoffmeister Quartets, Concerto Köln and the Stuttgarter Hofkapelle under Frieder Bernius. He also collaborates closely with instrument makers, restoration specialists, and major instrument museums.
Koch has published on the topics of performance practice, rhetoric and musical aesthetics. He has featured in numerous productions for radio and television and recorded over 25 CDs with works by Mozart, Beethoven, Burgmüller, Mendelssohn, Schumann, Chopin, Liszt, Wagner, and Brahms. Drawn to the irresistible sound of period keyboard instruments, Koch has performed exclusively on historic instruments for many years.

Current exhibition: Anniversary exhibition for the 10th anniversary
The gallery is open on saturdays between 14 and 18 pm.
After telephonic agreement the gallery can also be visited at other times.
Blücherstr. 14, 53115 Bonn
Phone: 0228-41076755