Update 06.02.2020 – Photos of the CONCERT: Lisa Shklyaver (clarinet) and Georgy Voylochnikov (piano) play works by L. v. Beethoven, A. Borodin, A. Gretschaninov, A. Berg, I. Stravinsky and J. Brahms 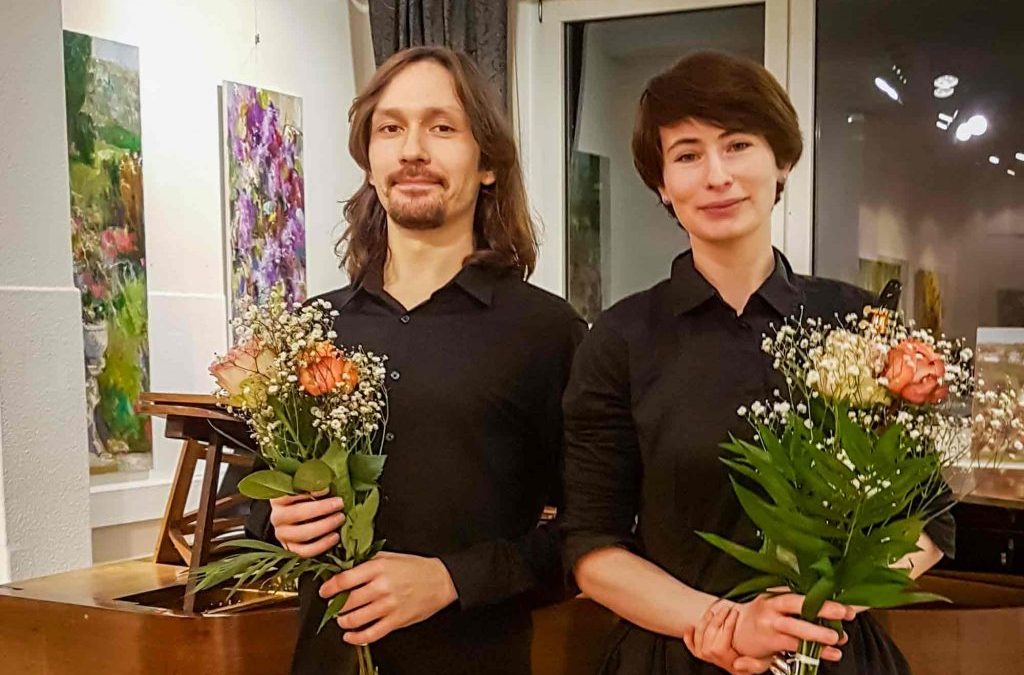 On February 1st, 2020 Lisa Shklyaver and Georgy Voylochnikov performed a very interesting program for clarinet and piano. Classics such as Ludwig van Beethoven, Peter Tschaikowsky and Johannes Brahms as well as Igor Stravinsky and Alban Berg and last but not least the less well-known composer Alexander Gretschaninov were heard. 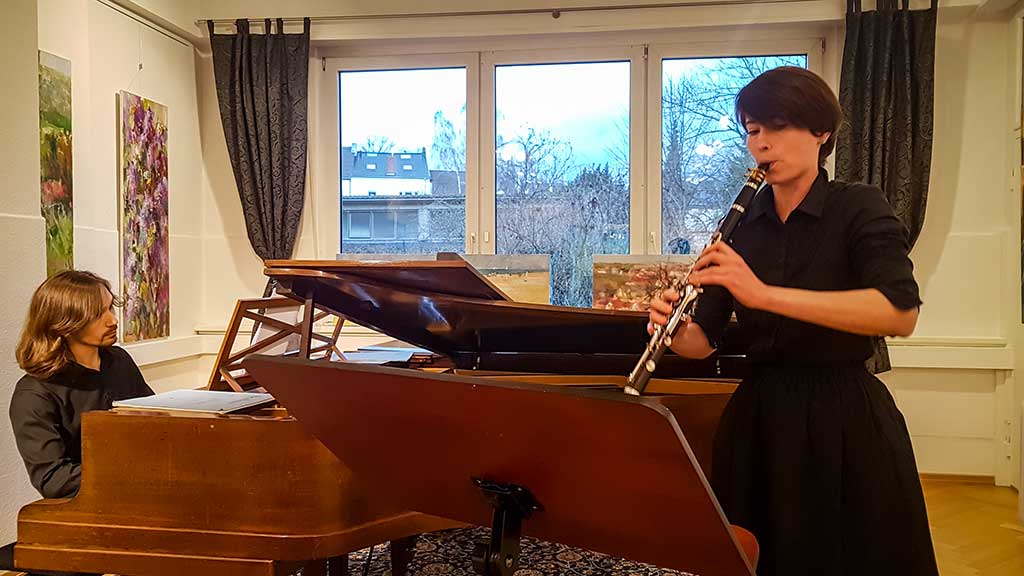 Given the biography of the two musicians, it is not surprising that the concert would be outstanding. Both have extensive stage experience, which the audience of the Musiktudio has been able to convince themselves of several times in regards to Voylochnikov, most recently at the opening of Natalia Simonenko’s current exhibition. Lisa Shklyaver performed for the first time in the Musikstudio and she lived up to her reputation, which she had gained, among other things, through numerous appearances together with Jos van Immerseel. The technical skills of the two musicians are therefore beyond question.
The focus was much more on the successful interaction between Shklyaver and Voylochnikov, which alternated in part with very successful solo performances with Tchaikovsky on the piano (which was added to the program at short notice instead of Borodin) and Stravinsky on the clarinet. Right from the start with Beethoven it became clear that the two musicians managed to harmonize their sound into one. From this basis, one of the two instruments repeatedly came to the fore and took on the leading role in the music. A successful surprise was the interpretation of the work of Alexander Gretschaninov, whose work astonishingly reminds more of older masters like Tchaikovsky in contrast to the new trends around Stravinsky and Schönberg.

An exciting concert, which was very well received by the audience!

Georgy Voylochnikov already honored the Musikstudio with his great arts on the piano at the opening of the exhibition “A Song of Dreams” by Natalia Simonenko. Today, however, he performs together with the clarinetist Lisa Shklyaver! She too can look back on a considerable CV. One of her regulars is the legendary master of early music Jos Van Immerseel!

Together, the two musicians have prepared a beautiful program for clarinet and piano with works by I. Stravinsky, A. Borodin, J. Brahms, A. Berg and A. Gretschaninov. Look forward to a true listening pleasure!

Below you will find more information and can reserve seats.

By filling in the fields below, you can conveniently reserve your tickets:

Lisa Shklyaver is one of the most engaging clarinet players of her generation. Her repertoire ranges from the earliest clarinet music on authentic instruments to contemporary works written for modern clarinet, both for solo performance and as a chamber music player.
At the age of four Lisa Shklyaver become her first piano lesson from her father Igor Shklyaver and at the age of 11 she started to learn play clarinet with her grandfather Joseph Shklyaver. One year later she played her first clarinet recital with the Far Eastern Symphony Orchestra, conducting by Victor Titz with Concertino by C.M. von Weber.
In 2007 she graduated from the clarinet class of Prof. Valeriy Bezrutschenko at the Rimskiy-Korsakov Concervatory in St.-Petersburg (Russia). She continued her improvement in the High School of music in Karlsruhe with Prof. Wolfgang Meyer and in the High School of Music in Trossingen with Prof. Chen Halevi. During the studying in Trossingen Lisa Shklyaver discovered a passion of playing historical clarinets. Since she finished the studying of these instruments and historical performance with Prof. Dr. Ernst Schlader she plays regularly with such orchestras as Göttinger Barockerchester, Elbipolis Hamburg, l’Arpa festante, Concerto Brandenburg, Bachchor Hannover,  Karlsruher Barockorchester, l’arte del mondo.
Since 2013 Lisa Shklyaver is a principal clarinet of Anima Eterna Brugge conducting by Jos van Immerseel with whom she plays regularly as a chamber music partner. Their debut – CD “la clarinette française” has been released in 2014 by outhere music. In the same year Lisa Shklyaver has performed the original version for basset clarinet of Mozart’s Clarinet Concerto in A major KV 622 with Anima Eterna and Jos van Immerseel in London, Munich and Antwerp.
Lisa Shklyaver is a guest of numerous festivals such as Beethovenfest Bonn, Sans Soussi Potsdam, Festival de La Chaise-Dieu, Festival Internacional Cervantino Mexico, Schleswig Holstein Festival, Festival d’Aix-en-Provence. She is appearing in the major concert halls such as Concertgebouw Brugge, Elbphilharmonie Hamburg, Opera de Dijon, Kölner  Philharmonie, Salle Pleyel Paris, Rudolfinum Prag, Lincoln Center New York, Opera House Sydney. 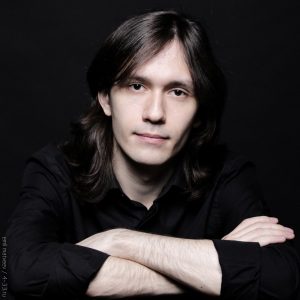 Announcement:
The next concert will take place on 15th of February 2020 at 17:00:
Adult students of the DTKV (German Musician Association) play for the public

Current exhibition: Natalia Simonenko presents “A Song of Dreams”
The gallery is open on Saturdays from 2 – 6 pm.
By appointment, the exhibition can also be visited at other times.
Blücherstr. 14, 53115 Bonn
Telefon: 0228-41076755