Update 23.08.2020 – Report from the event: “The history of the clarinet” – A musical lecture by our new teacher Lisa Shklyaver 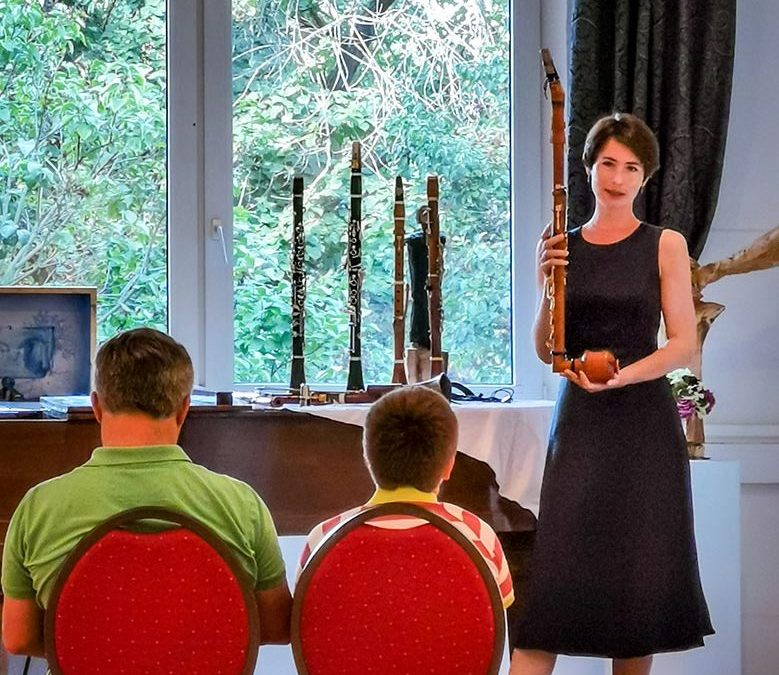 On Saturday, August 22, 2020, our new teacher Lisa Shklyaver gave an introductory lecture on the history of the clarinet. She had brought a whole range of clarinets from her collection, the construction of which beautifully illustrates the evolution of this still relatively new instrument.
The clarinet actually originated around 1700 in an instrument that resembled a short flute even more. But as its popularity grew, so did the inventiveness of the instrument makers, and the instrument became not only longer, but also technically more complex, as can be easily seen on today’s clarinets with so-called keys. Wolfgang Amadeus Mozart and his brother-in-law Carl Maria von Weber were also very important, and they gave it an increasingly important role in their compositions. Today, an orchestra, smaller ensembles and solo concerts are hardly imaginable without her, and she also plays an important role in modern music, especially jazz, since the saxophone developed from her!

In her comprehensive musical education, which Lisa Shklyaver first began in Russia and then continued in Germany, she acquired extensive knowledge for recorder and saxophone lessons in addition to her clarinet studies. Her specialization in the history of the clarinet and thus the old performance practice has also made her a proven expert on historical clarinets. It is therefore a great pleasure and honor to have won her as a teacher for all 3 instruments in our music studio.

The music studio is expanding its musical repertoire. We introduce our new teacher for clarinet Lisa Shklyaver. The Russian-born clarinettist performs worldwide as a soloist, among others with the Anima Eterna Bruges, in the most important concert halls.
The music studio and Mrs. Shklyaver invite you to a one-hour lecture on the clarinet – its history, development and sound.

Lisa Shklyaver writes the following about her lecture:

“What do we know about a clarinet? It belongs to the group of woodwind instruments, is made of wood and has many keys. You can hear it in a symphony orchestra as well as part of a chamber music ensemble or a brass band. However, the properties and characteristics of this instrument go much further.
In the course of its history the clarinet has experienced many experiments, happy and also sad moments. There have been some clarinets that fell into oblivion soon after their birth and no longer exist today. You can see them in museums, but you will never hear their original sound again. There are also clarinets that could develop in such a way because of all the turbulence around their history. The modern music world would be unimaginable without them.
How inspiring can the sound of a clarinet be? The friendship between a composer and a clarinet virtuoso has resulted in ingenious works of chamber music. Loving, tender, fiery, restless, angry, shouting, passionate – the clarinet can do all this and much more – an instrument of a relatively short but at the same time very exciting history of development.

The participation in the event is only possible with a previous registration!
Masks are mandatory up to the seats!

Lisa Shklyaver is one of the most engaging clarinet players of her generation. Her repertoire ranges from the earliest clarinet music on authentic instruments to contemporary works written for modern clarinet, both for solo performance and as a chamber music player.
At the age of four Lisa Shklyaver become her first piano lesson from her father Igor Shklyaver and at the age of 11 she started to learn play clarinet with her grandfather Joseph Shklyaver. One year later she played her first clarinet recital with the Far Eastern Symphony Orchestra, conducting by Victor Titz with Concertino by C.M. von Weber.
In 2007 she graduated from the clarinet class of Prof. Valeriy Bezrutschenko at the Rimskiy-Korsakov Concervatory in St.-Petersburg (Russia). She continued her improvement in the High School of music in Karlsruhe with Prof. Wolfgang Meyer and in the High School of Music in Trossingen with Prof. Chen Halevi. During the studying in Trossingen Lisa Shklyaver discovered a passion of playing historical clarinets. Since she finished the studying of these instruments and historical performance with Prof. Dr. Ernst Schlader she plays regularly with such orchestras as Göttinger Barockerchester, Elbipolis Hamburg, l’Arpa festante, Concerto Brandenburg, Bachchor Hannover,  Karlsruher Barockorchester, l’arte del mondo.
Since 2013 Lisa Shklyaver is a principal clarinet of Anima Eterna Brugge conducting by Jos van Immerseel with whom she plays regularly as a chamber music partner. Their debut – CD “la clarinette française” has been released in 2014 by outhere music. In the same year Lisa Shklyaver has performed the original version for basset clarinet of Mozart’s Clarinet Concerto in A major KV 622 with Anima Eterna and Jos van Immerseel in London, Munich and Antwerp.
Lisa Shklyaver is a guest of numerous festivals such as Beethovenfest Bonn, Sans Soussi Potsdam, Festival de La Chaise-Dieu, Festival Internacional Cervantino Mexico, Schleswig Holstein Festival, Festival d’Aix-en-Provence. She is appearing in the major concert halls such as Concertgebouw Brugge, Elbphilharmonie Hamburg, Opera de Dijon, Kölner  Philharmonie, Salle Pleyel Paris, Rudolfinum Prag, Lincoln Center New York, Opera House Sydney.

I look forward to your visit!

Current exhibition: In honor of Beethoven – A collective exhibition
The gallery is open on saturdays between 14 and 18 pm.
After telephonic agreement the gallery can also be visited at other times.
Blücherstr. 14, 53115 Bonn
Phone: 0228-41076755