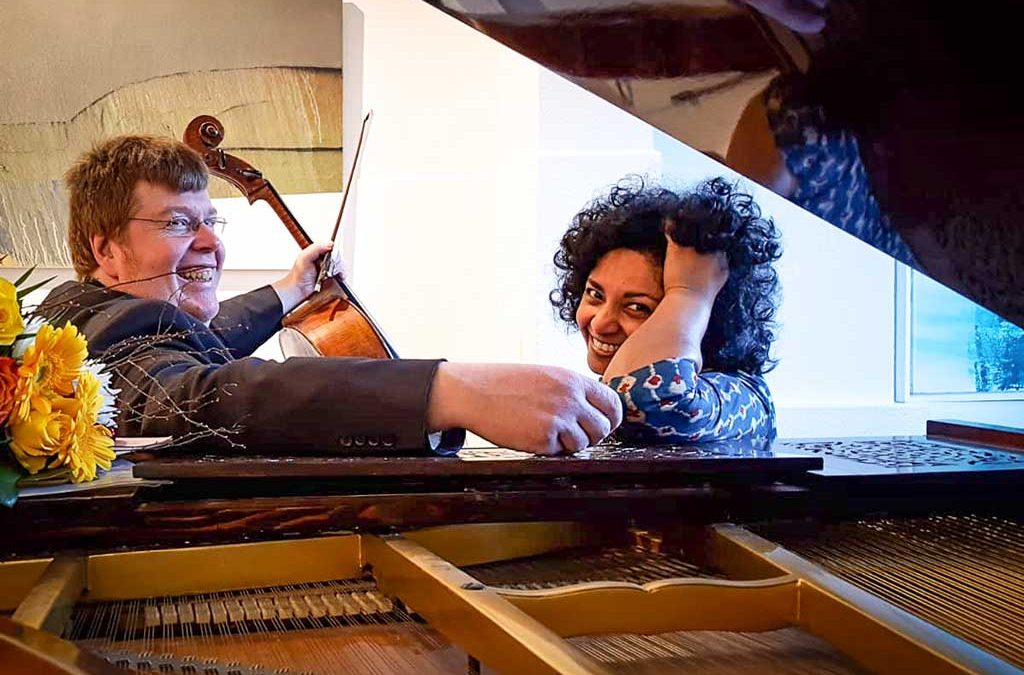 On Saturday, April 6, 2019, the concert with Sheila Arnold (piano) and Guido Schiefen (cello) took place. On the program were the only two sonatas by Johannes Brahms, that he had composed solely for these two instruments. Arnold and Schiefen are no strangers in the music scene and so it was not surprising that the studio was filled with highly interested people from near and far. They awaited a wonderful and very entertaining early evening. Brahms wrote the sonatas at intervals of more than 20 years and this was also noticeable in the diversity of the compositions, which of course are both highly emotional works.
Brahms’s first sonata was written at the young age of 29 with and it is believed that his thoughts were with Clara Schumann at that time, a well-known composer and pianist, into whom he had been in love for about 10 years already. More details about the two is unfortunately difficult to find, because only a few documents have been preserved. But Clara was also the wife of Robert Schumann and mother of 7 children. So it could not have been easy for Brahms. Officially, however, the sonata was dedicated to Prof. Josef Gänsbacher, a lawyer and singer who also played the cello. This perhaps unrequited love between Brahms and Schumann means that the listener at least believed to hear the difference between joy and melancholy within the movements. Interestingly, the slow 2nd movement is lost. It is said to have been especially written with thoughts on Clara, but Brahms decided against it’s release and he even refused Clara’s request to audition for her. Since then, the sonata has been considered incomplete.
Brahms wrote the second sonata in 1886 for the famous cellist Robert Hausmann, who had long asked him to write a cello concerto. The sonata is considered a late reply to his 1st Sonata, but it is unmistakably a late work, which is evident, for example, on elements such as the pizzicato inserts in the bass for the cello which he often used during this time. Robert Hausmann was considered a giant, who could also play a correspondingly powerful tone on the cello and this is also noticeable in the composition.
Guido Schiefen, with his over 1.90 meters and his powerful and highly emotional playing, is exactly the right line-up for this. In this concert, he proved to be an outspoken master of this instrument, and the instrument’s deep, soulful bass carried itself like a soft blanket that you want to wrap yourself in on cold days, right into the back of the room. At the same time, his play, which was very differentiated in terms of dynamics, impressed with a sensitivity that was also reflected in the emotions that mirrored in the face of the interpreter. Some musicians maintain a very dramatic display of their music through gestures, but not so Schiefen. It is much more the transmission of the heart through the whole body right into the fingertips, without becoming overbearing. It’s hard not to rave about it!
With Sheila Arnold he found his perfect partner at the piano. Her gentle to powerful playing complemented his play in perfect harmony and kept the balance between the two instruments. Thus, she proved that she is not only an outstanding soloist, but also has a very keen sense of chamber music, in that she knows how to fit into the sound, while still being convincing tonally in her individuality. The grand piano of Ernst Kaps (from 1875 with Erard mechanics) was a very fitting instrument in terms of time and sound, which created a wonderful harmony with the cello, which is even about 100 years older. 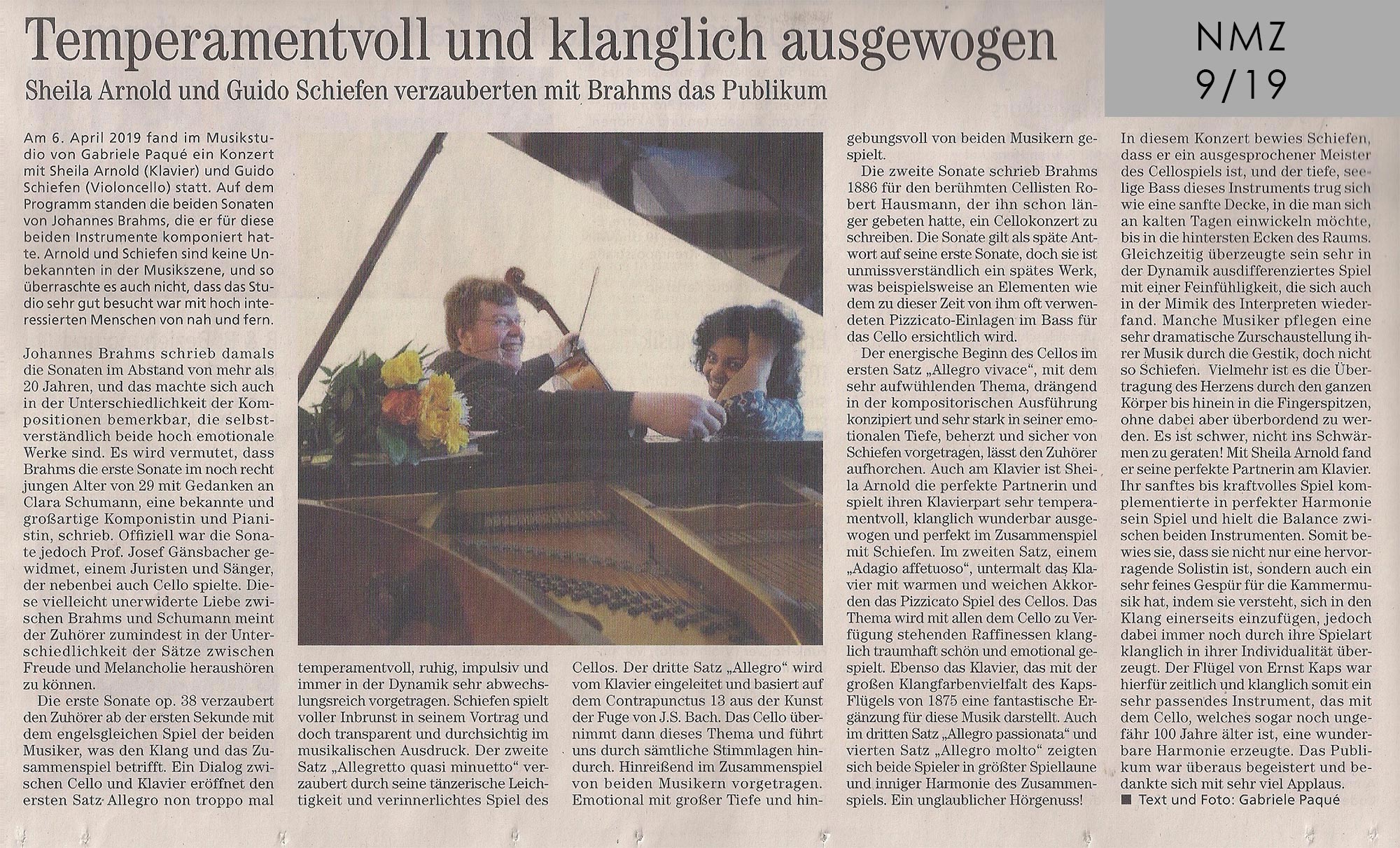 Dear lovers of music and art,–

Sheila Arnold already had several breathtaking performances in the Musicstudio and thus it is a great pleasure for me that she will play a concert again! But instead of a solo program, this time together with the outstanding cellist Guido Schiefen she presents the only two sonatas by Johannes Brahms that he ever wrote for these two instruments: The Cello Sonata No. 1 and 2!
Brahms composed the first sonata between 1862 and 1865, in his young age of 29, and the second one in 1886, which was first published in 1887. He dedicated the first sonata to Josef Gänsbacher, who was a professor of singing and a lay musician on the cello. The accompanying words to the sonata are: “The piano should be a partner – often a leading, often a watchful and considerate partner – but it should under no circumstances assume a purely accompanying role.” The second sonata is dedicated to Robert Hausmann, a famous cellist who had popularised the first sonata. Together with Joseph Joachim he had the great honor of playing the world premiere of the second sonata.

Immerse yourself in this wonderful music of romance!

“Without exception, this is the most eloquent, poignant, and revelatory Schubert piano playing I can remember ever hearing.” FANFARE 2017​

Sheila Arnold belongs to a generation of pianists who feel as much at home on the modern concert grand as on the fortepiano: the symbiotic feedback between the two instruments never ceases to inspire her. Her repertoire spans keyboard music ranging from the 1700’s to world premieres of contemporary music.
Very early on, her triumph as a finalist at the Clara Haskil Competition in 1995 and the Mozart Prize awarded by the Wiesbaden Mozart Society at the Salzburg International Mozart Competition reflect her special affinity with that composer: Sheila Arnold’s Mozart renditions have always been euphorically acclaimed by reviewers and audiences worldwide.
Ms. Arnold studied under the guidance of Heidi Köhler and Karl-Heinz Kämmerling, and went on to garner a considerable number of first prizes and successes at German and international competitions. She was also selected for a series of scholarships and awards, leading to extensive worldwide appearances since her youth. Many of them were recorded for radio and television broadcast, as well as on CD.
Renowned music festivals have invited Ms. Arnold to perform in Europe and the US. She has collaborated with well-known orchestras such as Lausanne Chamber Orchestra, the Orchestra of Bonn Beethovenhalle and Prague Chamber Orchestra, and with conductors such as Jesús López Cobos, Marc Soustrot, and Michael Hofstetter. Her chamber music partners include the likes of Nina Janssen, Sergio Azzolini, Wilhelm Bruns, Ralf Manno, Guido Schiefen, Michael Faust, Isabelle Faust, Alexander-Sergei Ramírez, the Mandelring Quartet, and many others. Inspiring encounters and collaborations with renowned musician colleagues have taken place at Festivals such as the Spannungen Chamber Music Festival (Heimbach) or the Music Festival in Hambach (Neustadt).
Sheila Arnold’s previous CD with works by Brahms and Schumann was released in 2010 and featured as a CHOC selection in Classica, the French classical music magazine. Her latest CD recording on Franz Schubert has been highly acclaimed by leading critics.
The next CD “Écoutez!” is going to be released in Spring 2018 and will be dedicated to the works of Claude Debussy, Toru Takemitsu and John Cage. In 2006 Ms. Arnold was appointed piano professor at Cologne Musikhochschule. She is frequently invited as member of national and international piano competitions and gives regular masterclasses.

Many of her students have won prizes and scholarships at national and international competitions. 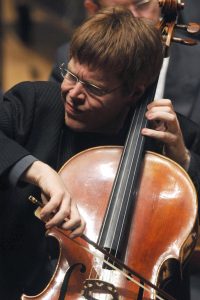 “…I do not hesitate to say that he is the most phenomenally gifted cellist I have ever heard…“This is an excerpt of a recommendation letter from the legendary piano Professor Peter Feuchtanger (London), which he wrote after listening to 14 year old Guido Schiefen‘s cello performance.
After a promising debut as a violin player Guido Schiefen very soon fell in love with the cello. As a result of good progress he became first prize winner of several youth competitions (1st prize Bundeswettbewerb “Jugend musiziert“ 1980) and at the age of twelve he joined the Musikhochschule Köln as a “young student“ of his teacher Prof. Alwin Bauer. Besides that he was inspired by additional lessons with Maurice Gendron and Siegfried Palm.
Already at young age he was performing on stage as a soloist and chamber musician. After finishing school (Abitur 1987) he continued his fulltime studies in Cologne. During that time he was engaged for the first time to several radio and television productions as well as CD recordings.
As winner of the Köln Hochschulwettbewerb he received a scholarship by the German “Studienstiftung“. In 1990 (at the age of 22) he became a prizewinner in Moscow at the 9th Int. Tschaikowsky competition. Soon after that he was awarded the young artists promotion prize of the country Nordrhein-Westfalen (North Rhine Westphalia). He was invited to perform in International music festivals like Bachwoche Ansbach, Davos, Rheingau Musikfestival, Echternach / Luxemburg ,Saga / Japan etc.
Ever since he has been performing worldwide in renowned concert halls with orchestras like WDR Köln, Bamberger Symphoniker, Festival Strings Lucerne, Berliner Symphoniker, Royal Philharmonic Orchestra London among others. In Duo Recitals and other chamber music formations he performed with pianists like Günter Ludwig, Pavel Gilov, Olaf Dressler and Alfredo Perl Additionally he was a member of the “Ensemble Incanto“ playing in concerts worldwide.
Guido Schiefen’s repertoire obtains the essential standard masterpieces of the cello repertoire as well as more unknown works of less famous composers from different epoques. Some of these pieces have been published for Tonger (Köln), Schott (Mainz), Peters (Leipzig) among others. Quite a big part of it has been recorded on more than 30 CDs during the last three decades for companies like Arte Nova, Oehms Classics, cpo, Darbringhaus & Grimm. Most of these recordings have been reviewed enthusiastically and thus have established Guido Schiefen’s reputation as one of his generation’s leading cellists.
Recently Guido Schiefen appeared on the CD market with two new recordings: the complete works for cello and piano by Max Reger (with pianist Jacob Leuschner, for Oehms Classics) and “Schumannia“ (the standard pieces for cello and piano plus song transcriptions) with pianist Markus Kreul (for Dabringhaus & Grimm). As a result of “Schumannia“ Markus Kreul and Guido Schiefen were rewarded as “Schumann ambassadors“ and became members of the board of artists of the Schumann Forum Bonn in 2017.
Guido Schiefen is a very passionate cello teacher as well. Since many years he has been teaching masterclasses in Germany, the United States, Hungary and other countries on a regular basis. In September 2008 he was appointed as cello teacher at the Hochschule Luzern – Musik. In 2009 he was awarded the title “Professor“ . Since 2000 Guido Schiefen is artistic director of the “Klassik-Bühne Rhein-Sieg“.

Current exhibition by Máro
The gallery is open on saturdays between 14 and 18 pm.
After telephonic agreement the gallery can also be visited at other times.
Blücherstr. 14, 53115 Bonn
Phone: 0228-41076755